Reflections on a setting written by a child

Boy, they sneak up on you. January 1st is coming up in just a few weeks and that day constitutes not only another year spent circling the sun but my 6th year playing RPGs. Not much of a milestone, especially compared to others in the blogosphere who have been playing since before D&D was even published. But it's still more than a quarter of my life.

In honor of this unimportant anniversary, I'm going to share one of my earliest creative thoughts born from RPGs with you all.

Yeah, my creativity sectors needed some work. They still do.

So here's the skinny. There was this ancient empire a thousand years ago. the "Totally-not-Roman Empire". They held sway over such vast territories that, after the fall, communication between these many distant lands broke down.

One such place was a tiny island hundreds of miles away from any nearby coastline. The place had been settled shortly before the fall by a young prince as a sort of pet project. He founded on the island a town to house the workforce as well as a castle for himself and his friends. 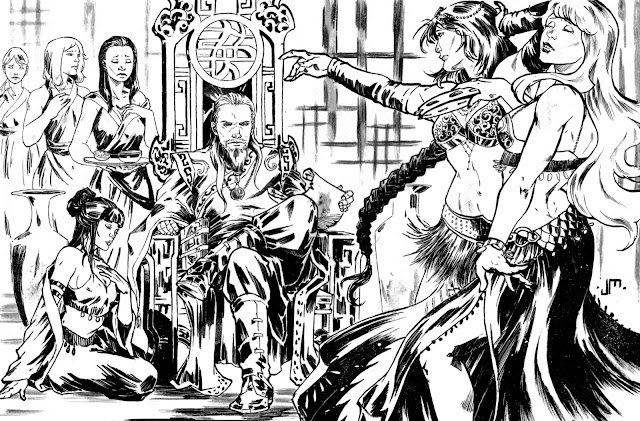 Eventually, this Prince went on and inherited the Empire, doing his part to cause its decline. But the island was still inhabited, thousands of people farming the land, fishing the seas, and thriving off of the goods shipped in by the Empire.

When the Empire fell, the ships stopped rolling in. By the time powers on the mainland had reached the point of wealth and stability where they could take ownership of the island and support it with long-range shipping, the island had been utterly forgotten. What few scholars and administrators who tried to reach out to the island were met with ambivalence by a world more consumed with its own petty squabbles.

In this time, the island fell into disarray, the population which numbered nearly ten thousand before the fall, dropped to less than a thousand within a decade. The issue was not just that the island couldn't support the former population by itself, but it was also hit with an infestation of the dead.

Where exactly they came from nobody knows. Some say a necromancer, some say it was just part of the cataclysm which befell the Empire, some thought it was the Gods taking revenge on their faults. But no one knows for sure.

During the collapse, the people of the town quickly fell to the dead. But, eventually, the town organized a defense. They tore down houses and villas to build walls and protect themselves from the onslaught of the dead. But not all the survivors currently living can be found within the ruins of the town.

The castle is still occupied, but not by the Prince's decadent friends, no. The new denizens of the fortress can be charitably described as "insane". A pseudo-religious cult of about 50 "knights" who don thick plate armor and mount up on their barded horses and ride forth to kill the dead who cover the island.

That's about as far as the setting ever got back when I first wrote it in 2014. Here's the original design document. The last edit I made was in 2016, when I came up with the god awful name "Roltarich".

Some comments I have on this setting as an adult.

It certainly has potential. There are some interesting questions raised: Why can't ships reach the city now? How was it forgotten? What befell the Empire?

Why do the Knights ride out daily? Where do they procure armor and horses from? Are they religious? Insane? Scared?

What really caused the dead to rise? A necromancer? A plague? The gods?

If fully fleshed out, this could make an interesting mini-setting. I may take the time to do that, I may not. Only time will tell.

Did you have any questions about this setting? Did you like it? Hate it? Drop a comment and let me know!
Posted by Thebadgamer at 5:02 PM No comments:

Get updated when a new post arrives at the Stronghold!